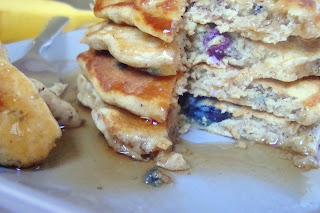 I’m taking life in right now.  Yesterday (Saturday), Paul and I had such a fun day.  He has been working extremely hard.  The week before last, he worked about 60 hours.  On Friday of this week, he worked about 15.  That was in addition to the 40+ that he had already worked this week.  I got up early as I usually do and he slept in so I decided that he deserved a little Saturday morning love in the form of pancakes.

For some reason, I have been craving pancakes lately and we had some blueberries that needed to be used.  I love Sarah’s blog and went directly there for a pancake recipe.  She loves pancakes and has an arsenal of pancake recipes, a lot of which I have wanted to try for a while.  Although I adapted it a bit, the original recipe would have been extremely perfect too.  This one was really great.  One of my most favorite flavor combos is peanut butter, banana and honey, especially for breakfast.  So I forwent the syrup and dressed mine with PB, honey and some banana slices.  Paul went with traditional syrup and butter and he said they tasted like banana bread.  Pretty sure you can’t go wrong with pancakes that taste like banana bread!

These were super easy to throw together.  They were really moist and really good leftover too!  Here’s a rundown of the rest of our Saturday:

Lunch at the Plaza at California Pizza Kitchen. Paul had BBQ Chicken Pizza and I had half Thai Crunch Salad with avocado instead of chicken.

Art of the Chopper exhibit at Union Station.  It was really awesome.  If you have any interest in motorcycles, I would recommend it, it’s very affordable entertainment!

A tour around Lake Waukomis in the Northland.

Some shopping and music at Zona Rosa.  We found Heavenly Olive Oils and Vinegars and purchased some 18 year-aged Balsamic Vinegar.  They had lots of oils and vinegars to taste! 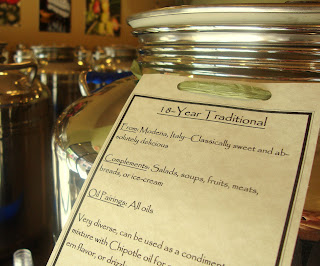 Dinner at The Legends shopping center in Kansas City, KS. We had Cheeseburger in Paradise and heard some really good music and we decided that we need to make it a point to hear live music more often!

And one final stop at the campus of our church in Leawood, KS so that Paul could pick up something that he needed for today’s worship services.

By the time we made it home, we were pretty exhausted but feeling so blessed by our amazing day together.

Pulse the oats in a food processor until they resemble sand.

In a separate bowl, whisk vanilla, milk, eggs and canola oil. Slowly add into the dry ingredients and mix well. .

Fold in blueberries and mashed banana.

Preheat an electric griddle or large skillet on the stove. Butter or spray with non-stick cooking spray. Spoon 1/3 cup of the batter onto the griddle or skillet. Flip when the edges begin to dry and bubbles form. Serve with syrup, peanut butter, more fruit, powdered sugar, etc.

Adapted from Baking Serendipity via More than a Mouthful